Years ago when the perimenopause first said hi - and at the time it manifested itself in low libido and the feeling of my best years were over, haha - I dreamed about Aphrodite. She had lost her girdle and I had to go find it.
Quite a fuss because I didn’t know what that girdle looked like and I was quite overwhelmed in my dream because of Aphrodite’s presence.
I remembered the dream and then I did nothing with it until the beginning of 2019. At that time the menopausal symptoms became worse and the feeling of aging and not longer feeling juicy reached their top and I had to think about that girdle again. Do I have to do anything with it then? Will it help me?

After hours of browsing the Internet I came across all sorts of things about the girdle, which according to many must have been a sort of belt, something on her hips. But I also found a very different view that immediately appealed to me.

”The traditional translation of Aphrodite’s famous ‘kestos himas poikilos’ = embroidered girdle in Homer’s Iliad, Book 14, is not without controversy. The issue is that Homer’s text literally says that Aphrodite looses from her breasts - ἀπὸ στήθεσφιν ἐλύσατο (apo stetesphin elusato) - the kestos himas. Thus it could have been a decorative breast-band and not a girdle or belt, normally worn around the waist. Hera (…) called Aphrodite to come aside and speak to her. “My dear child,” said she, “will you do what I am going to ask of you, or will refuse me because you are angry at my being on the Danaan side, while you are on the Trojan?” Zeus’ daughter Aphrodite answered, “Hera, august queen of Goddesses, daughter of mighty Kronos, say what you want, and I will do it for at once, if I can, and if it can be done at all.” Then Hera told her a lying tale and said, “I want you to endow me with some of those fascinating charms, the spells of which bring all things mortal and immortal to your feet. I am going to the world’s end to visit Okeanos (from whom all we gods proceed) and mother Tethys (…) I must go and see them that I may make peace between them; they have been quarrelling, and are so angry that they have not slept with one another this long while; if I can bring them round and restore them to one another’s embraces, they will be grateful to me and love me for ever afterwards.” Thereon laughter-loving Aphrodite said, “I cannot and must not refuse you, for you sleep in the arms of Zeus who is our king.” As she spoke she loosed from her bosom the curiously embroidered girdle into which all her charms had been wrought - love, desire, and that sweet flattery which steals the judgement even of the most prudent. She gave the girdle to Hera and said, “Take this girdle wherein all my charms reside and lay it in your bosom. If you will wear it I promise you that your errand, be it what it may, will not be bootless.” When she heard this Hera smiled, and still smiling she laid the girdle in her bosom. - Iliad, Book 14, 188-225 (3) ((click here for the website where I read this)

So she loosened the embroidered girdle from her bosom …
That sounds more like a bra!
The first bra with the ancient Greeks was a strophion. An elongated cloth that was initially only worn by female athletes to bind their breasts.
Later it became a fashion item and the strophion was worn over the tunic. So very hip, your bra as outerwear. And those trendy breast-bands were richly embroidered.

The strophion that Aphrodite wore was very special. It was embroidered with “those fascinating charms, the spells of which bring all things mortal and immortal to your feet.”
I decided that I also needed such a bra.
When you have reached the age of fifty and you no longer feel so sexy due to hormones and aging, you can use such a thing as an enchanted bra.
A bra that is embroidered with words that describe how you want to feel.
A bra that makes you irresistible, bringing all mortals and immortals to your feet. :-) 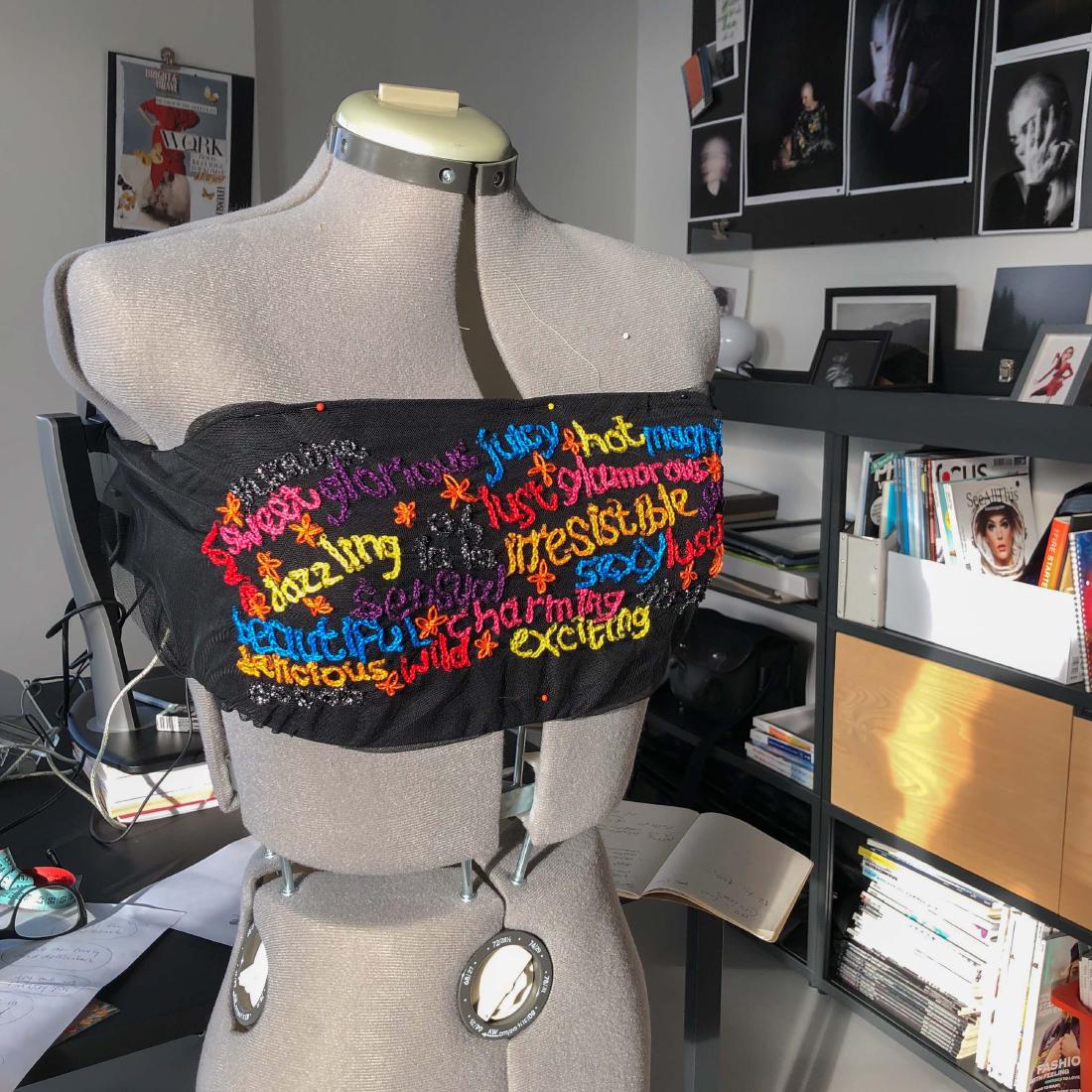 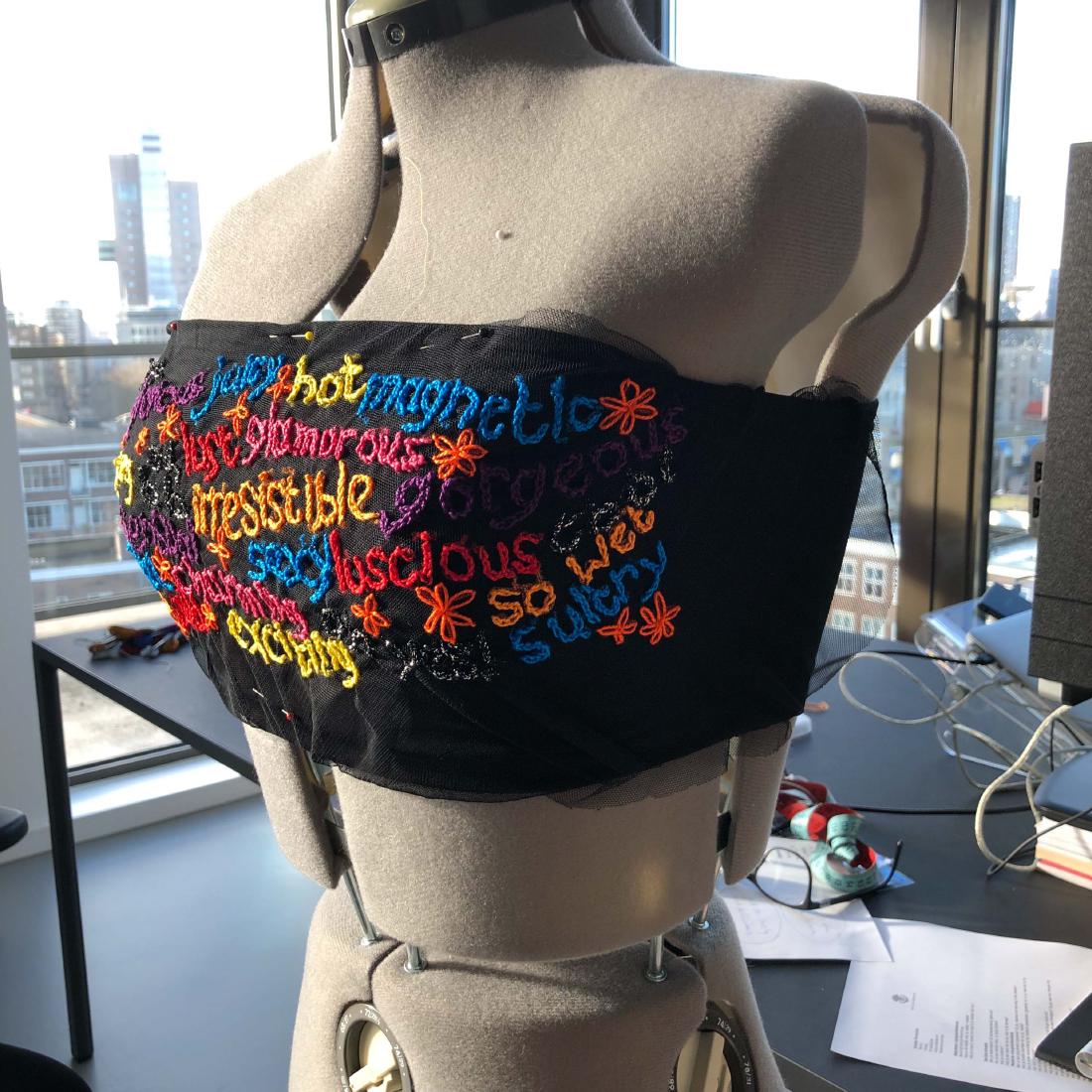 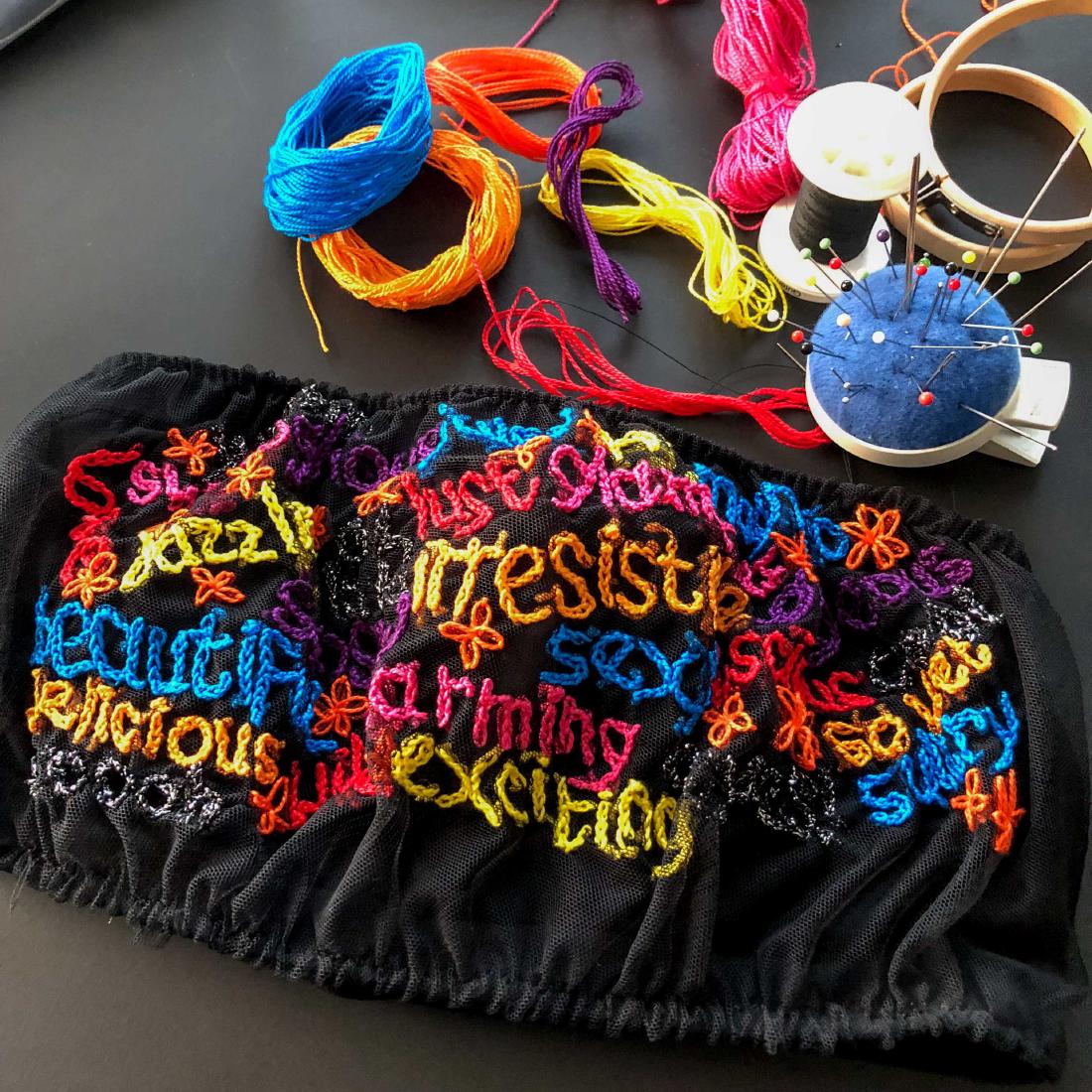